Within the series of commented reprints will be monographs of landmark studies by early music archaeologists (19th century and early 20th century), and anthologies in which articles on a specific cultural area, music tradition, or instrument type are bundled. The high-quality reprints will always be commented by renowned scholars, giving some historical context to the work, documenting in which ways it has value for its insights and illustrations, but also pointing out in which way scholarship has moved on. Quite often, valuable interpretations and research questions are raised in these early days, which were not followed up later.

First volumes of the monograph reprint series are: 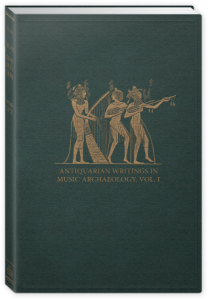 Carl Engel – The Music of the Most Ancient Nations, particularly of the Assyrians, Egyptians, and Hebrews (1864 / 1929), with a general introduction and comments on individual chapters. Authors of the comment section are Graeme Lawson, Sam Mirelman, Sibylle Emerit, and Theodore Burgh (forthcoming, March 2014). Please get in contact with us if you like to subscribe.

Thomas Wilson – Prehistoric Art, or the Works of Art as Manifested in the Works of Prehistoric Man (1898), with comments on the individual sections of the musical instruments chapter (forthcoming, 2014).